Mugwort is a very weedy perennial herb plant that quickly grows into a five feet high thicket by the summer. A good way to identify this plant is to turn over one of the highly lobed alternate leaves. The color is a light grey version of the upper surface. 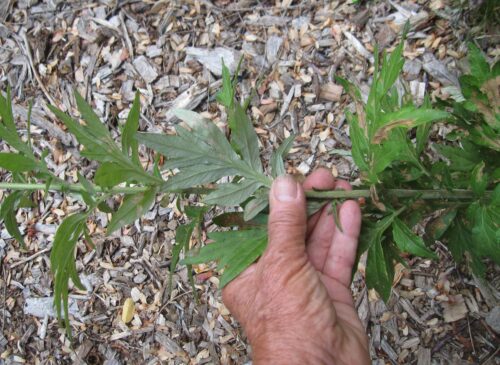 The underside of Mugwort Leaf

Except for the remaining seed heads on stiff stems, the previous year’s crop disappears over the winter and regenerates from the ground along the rhizomes in early spring.

Mugwort may be confused with other plants such as our native goldenrod — especially in the winter. 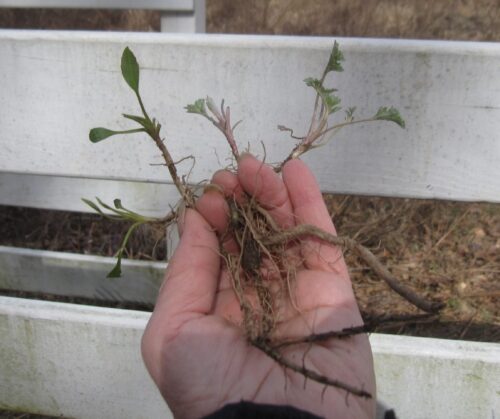 Goldenrod and Mugwort in Early Spring

Since mugwort seeds generally don’t germinate, winter stems can be left on the ground when cut.

In the winter, carefully examine the shape and underside of any remaining dried leaves.  Also, mugwort — not goldenrod —  generally bears a thick node somewhere along the stem.

The best time to remove this weed is anytime after a soaking rain or during a winter thaw. However, because its growth is primarily from along the rhizomes, uprooting only one on two inches of the root isn’t very effective.

The rhizome roots are long and very fine, which is why they easily break. The trick is to kill the entire rhizome, which grows to two or more feet long. 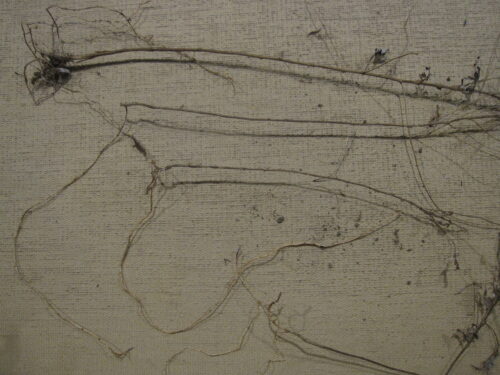 Since the rhizomes lie only an inch or two beneath the surface, they die if either dried above the ground or are buried.  To expose and dry the roots, slide a spading fork just beneath the plants, tilt the fork up then flip the dirt with the rhizomes facing up onto other young mugwort plants so the roots are exposed and the plants beneath are buried.  I tried this, but haven’t given it the test of time. 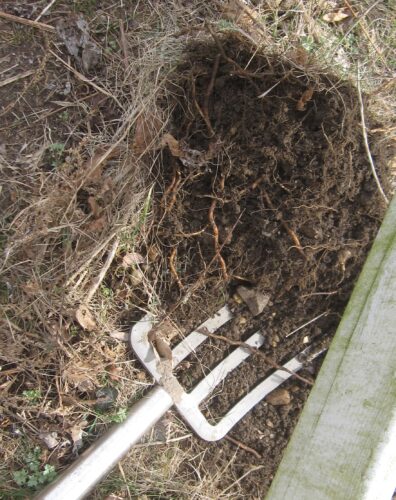 What I have tested for over a year is the area beneath the park sign in the photo below.  Originally the area was covered with mugwort that grew to cover the bottom of the sign. Now, the portion behind the sign and up to the log lying across the area is free of mugwort, while some plants are growing under the sign. Why?