A tree engulfed in English Ivy will exhibit decline for several to many years before it dies. Ivy obscures light for photosynthesis from reaching the tree’s leaves, and the added weight of vines makes younger trees and branches susceptible to blowing over during storms. English Ivy also has the ability to spread bacterial leaf scorch, which affects a wide variety of trees, and it creates “ivy deserts” across landscapes.

The leaves and dark green (nearly black) berries of English ivy — berries mature at the tree canopy in January — can be toxic to birds, other wildlife, and even humans. Children are especially susceptible to this plant’s poison. Ingestion can cause delirium, stupor, convulsions, hallucinations, fever, and for some, contact with its leaves can cause skin irritation, itching, rash, and blisters.

As the vines mature, their three lobes merge into one leaf. And since poison ivy often grows along with English ivy, both with hairs along the older vines (poison ivy vines are leafless in the winter) wear heavy gloves, glasses (or goggles), sleeves and long pants to cut the vines near the bottom of the tree.

There’s a simple solution to removing the ivy, permanently. First, using pruners or a serrated blade for the larger vines, cut the ivy on the tree at least a foot above the ground. The upper remaining ivy will die on the tree. Gently pull the lower section of each cut vine down to the ground (avoid removing the bark) and pull it out at least 3 feet away from the trunk, cutting and uprooting any vines in the way.

For the smaller roots I like re-purposing 8” lineman’s pliers from Harbor Freight for leverage with grabbing and uprooting. Repeat uprooting around the tree until the 3 foot area along the ground is fully cleaned of ivy. Cover the open area with wood chips, but leave a few inches of clearing around the trunk. 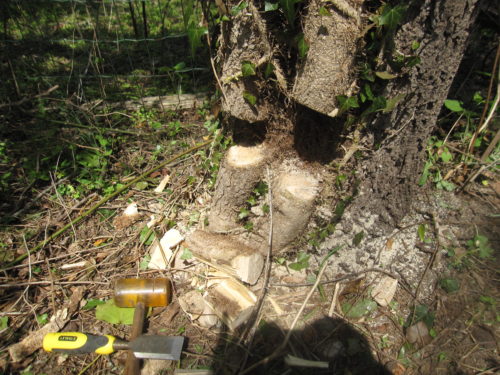 Often embedded in trees, thick vines of mature English ivy can be cut with a limb saw, hammer and chisel, and removed. Specifically, at a foot or two above the ground, cut these large vines at two locations along the vine about five inches apart.

Carefully remove the severed section without damaging the tree. It could take a year for the upper ivy vines to die.  Remove the lower portion down to and along or under the ground. Ivy tends to wrap around the foot of trees where they girdle them and damage tree roots. This process may need to be repeated in a year.

(Click Vine Removal for details.)  Severed vines can be left to air dry but must be flipped periodically, or placed in a clear plastic bag and left in the sun (solarize) for a few weeks before a yard waste pickup.

To remove patches of ivy running along the ground, start at the outer edge and, using pruners or a pair of 8″ or 9″ lineman’s pliers, grab, pull and cut each runner for as far as possible. Repeat to where the runner originates at the root. Extract the root, gather the runners, pile them on cardboard or plastic sheeting, and flip them occasionally to desiccate.

This method is quick and effective when the ground is moist and as long as the ivy has never been mowed. Note: Runners cut by mowing establish deep roots at the nodes, resulting in dense overall growth that requires additional root removal.

Another option for the English ivy growing along the ground is to smother it by sheet mulching. Pull up as much ivy as possible then lay corrugated cardboard or thick layers of newspaper plus layers of compost, straw and wood chips to kill it. The mulch should stay in place for at least two growing seasons and may need to be augmented several times. Black plastic sheeting secured with landscape staples is another option when laid at least 3 feet from trees, or where tree roots won’t be compromised. Cut runners from around the edge of the plastic.