Japanese and Chinese wisteria also differ by the directional rotation of the vine around a tree — counter-clockwise or clockwise, respectively. Although both are invasive and difficult to control or eradicate, Chinese is worse. (Least aggressive is American wisteria.)

Click Vine Removal for details regarding ivy and vine removal from a host tree. Wisteria vines reproduce by seed from the pods and by runners or stolons (above-ground stems) that produce shoots and roots at short intervals. To prevent dispersal, wisteria seed pods should be removed and disposed.

Cut tree-climbing vines at the ground and pull out all the roots to effectively remove this plant. For large vines, cut with a hand saw or battery operated reciprocating saw near the ground, or use a chain saw above the ground; dig out large roots with a Pulaski tool, mattock and weed wrench.

The ground should be moist to successfully uproot wisteria runners. One of the best times for uprooting is late fall and winter during a warm interval when the ground has thawed.

Clear the ground of leaves, twigs and branches to see the stolons that often crisscross each other. Snip and remove over-runners to enable uprooting the ones being pulled.

Nodes are swellings or knobs in a stem or stolon from which leaves or roots emerge. Larger nodes have deeper roots beneath, which need to be uprooted with a weed wrench. 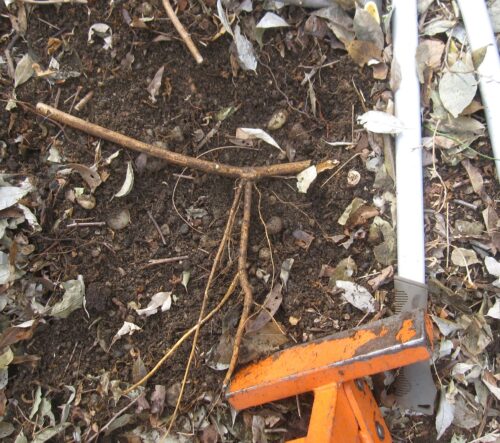 The best tool to pull the stolons with their roots is a serrated anvil jaw lopper, used as a vice. This tool grabs and gives leverage for pulling out the roots, and also severs wisteria’s strong runners with a quick, firm, power cut to break the stem. Pruners also work to cut small stolons, and a limb saw blade on a reciprocating saw  for large cuts.

The wisteria stolons and roots are generally yellow, whereas Oriental bittersweet roots are orange and porcelain-berry, reddish brown.

Because any portion of the root remaining on the ground may sprout, soft/pliable wood cuttings  should be air dried above ground or bagged and disposed.

Ongoing management should begin early in the growing season to pull or cut new sprouts every few weeks.