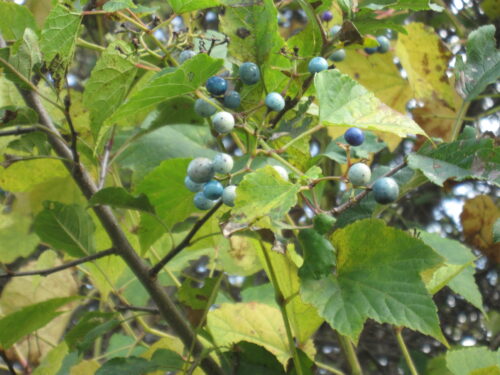 The porcelain berry vine is a relatively new invasive to Long Island. It is similar in appearance to our New England grape, also with twining tendrils, except that the pith (center of the vine) of porcelain berry is solid white; its mature bark does not peel; the berry colors may be white, yellow, lilac, turquoise, green or pink, eventually turning dark blue; the leaves are generally smaller with deep lobes; and the best indicator: the underside of the porcelain berry leaf is always glossy. 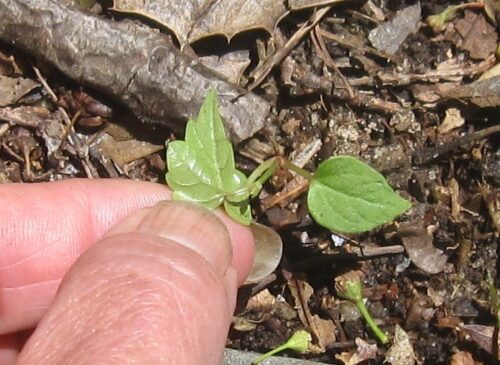 Cotyledons, the first two leaves to appear from a germinating seed, resemble NE grape and Virginia creeper, but the underside of the first true porcelain berry leaf is glossy. These vines often run along the ground where they may root wherever the nodes make contact. 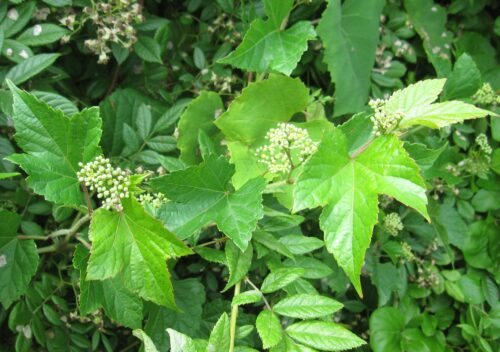 When vines are cut above ground they may remain on the host tree or shrub to dry. However, once in bloom or with berries, the vines and berries must be removed and disposed of. While this is the first step to achieve control, vines should then be uprooted with the method changing as the vine ages. 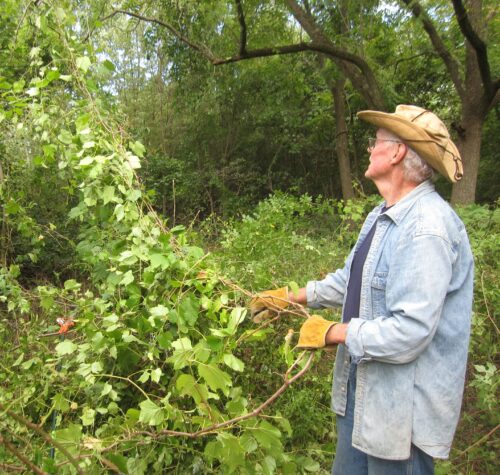 Pulling porcelain-berry vines from a tree in late summer

Young vines thicken for about two inches where they enter the ground. These vines are easily removed by grabbing them low on this thickened portion with a pair of linesman’s 8-inch pliers, using a back and forth pulling motion, ideally in damp soil, while visualizing the root as it releases (mind over matter helps). 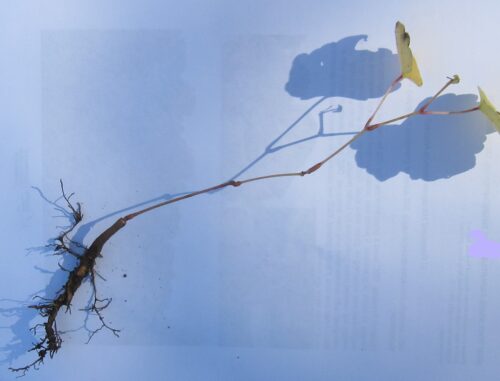 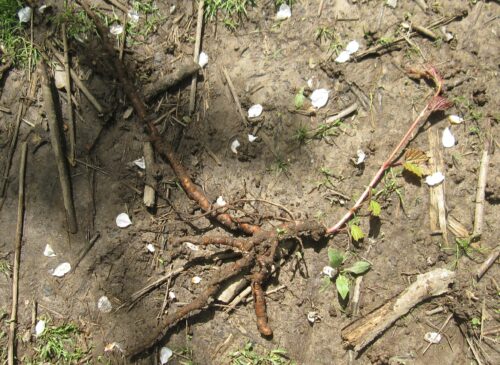 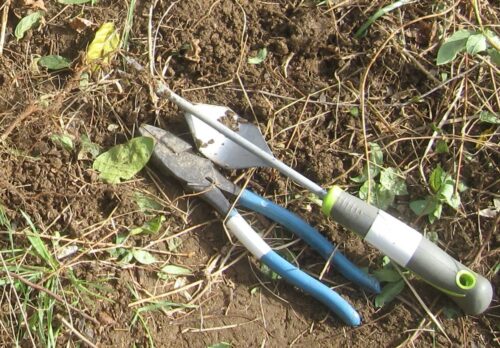 At the next growth stage, the vines lose the thick portion to the root crowns, which must be dug out — using a leveraged hand weeder and pickaxe, or a mattock or Pulaski axe for larger roots. Then the exposed crown may be extracted with the pliers, and where possible, every severed lateral root removed. 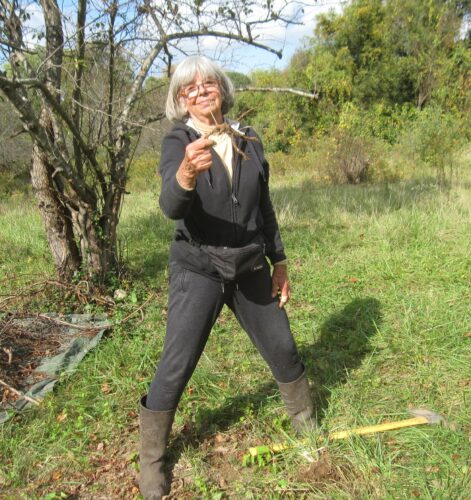 The Pulaski axe was used here 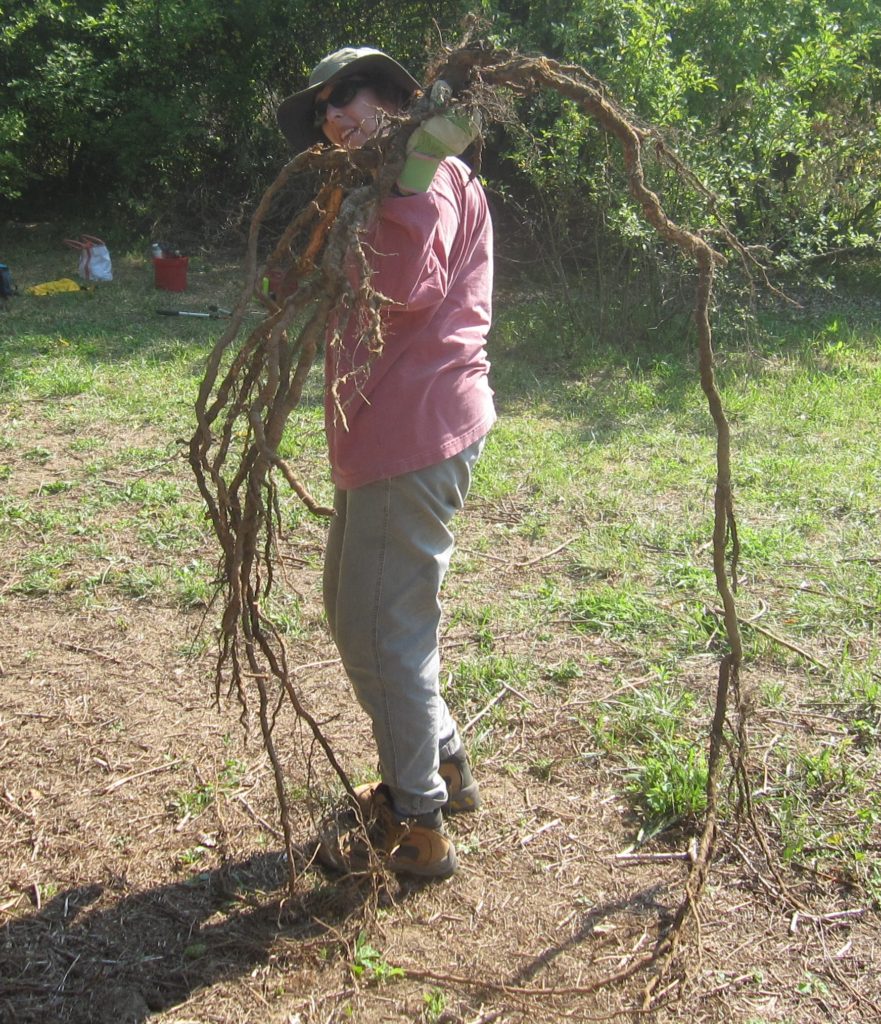 The root is knotty/rubbery, and the bark of the root easily separates from the core or pith. But because severed roots may send up suckers and the surface stems can still root at their nodes, all flexible (live) parts must be allowed to dry above ground or safely bagged/discarded, and the site routinely monitored. 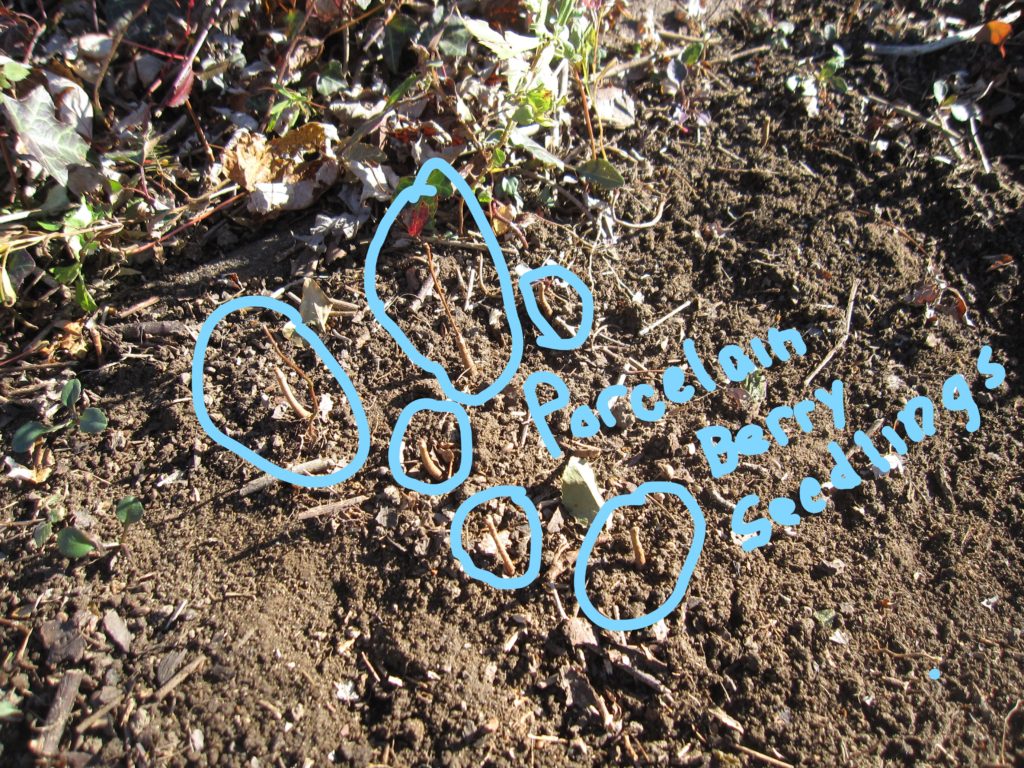 Older porcelain-berry vines can be identified in mid winter by the straw colored zigzag vine with curly tendrils at the nodes. During a winter thaw, dig out the root crown  with a pick or Pulaski axe and pull lateral roots with the linesman’s pliers or weed wrench. 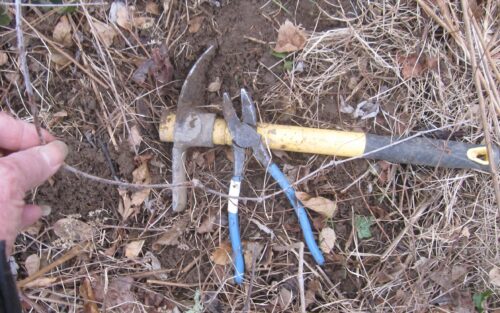 Check on regrowth monthly and, with linesman pliers, remove suckers and new seedlings in the area as they emerge.