Along the fence that transects the Park’s upland trail, millions of  garlic mustard seed pods were ready to disperse their seeds when volunteers with the Invasive Plant Sub Committee of Huntington’s Conservation Board went to work.

June 10, 2015:       Volunteer Kate Levine helped pull a large section of non-native, highly invasive garlic mustard. Many of these invasive plants are edible, which accounts for this European invasive being here.

Pictured here after removing the stand of garlic mustard. Eventually the  entire infestation, running several hundred feet long and roughly 50 feet wide on both sides of the fence, was cleared of this highly invasive plant.

The stand of garlic mustard northeast of the  fence was removed by Denise Harrington and her daughter, Jenna.  This biennial herb blooms and produces seeds only at the end of its second year when it uproots easily, but the seeds must be bagged & solarized.

After pulling the garlic mustard we discovered English ivy hidden beneath. Removing that, however, can wait until late fall when vines are easier to reach. Because English ivy doesn’t produce its toxic ripe berries until late fall, there’s no rush.

June 12, 2015:     Anne Meyer (pictured) and her husband Rich uprooted over 100 seedlings and small saplings of Freeman maple (hybrid of red and silver maples) with the use of weed wrenches. The largest sapling was nearly 12 feet tall.

Pictured here in the meadow adjacent to the old horse paddock are the remaining maples after the first pull. There’s still more maples in this field and much more plus invasive shrubs in the larger meadow further down the trail.

Can you find the trail? This is what remained of the upland trail after woody and herbaceous plants took over.  The invasive multiflora rose outcompetes  native raspberries, and mugwort out-competes native goldenrod; but native poison ivy is also an issue on the trail.

June 19, 2015:       Multiflora rose is widespread throughout this park. The week before this picture was taken these  very sharp, thorny shrubs were covered in white flowers. Now, millions of small red berries will grow to disperse new seed.

The path opened up once the multiflora rose was cut to the ground and removed.  We seeded the bare soil with native warm season grasses to prevent invasive woody plants and other weeds from reseeding. Eventually the trail will be routinely mowed.

June 20, 2015:   Poison ivy was found in several places along the upland trail; their white flowers had already grown and died. Now they are producing small green berries, which will ripen to off-white.

Cautiously covered from head to toe I uprooted all the poison ivy along the upland trail. We are the only known species allergic to poison ivy.  Birds especially enjoy the berries, which is how the plant spreads.

Poison ivy is a native Long Island plant species and grows best along our woodland edges and trails where it climbs trees to reach sunlight at the top of the canopy. 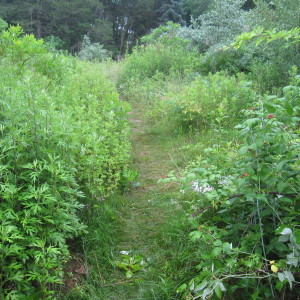 Upland trail without poison ivy and multiflora rose. Today, the upland trail at Carpenter Farm Park is less obscured by shrubs and poison ivy — at least for now — due to the efforts of its dedicated volunteers.