June 20, 2015:         An infestation of purple flowering brown knapweed was found in an open area between the paddock and lower fence. Marion Cristie, Deborah Hanley and Judy Lom pulled and cleared out this highly invasive plant species.

According to Wikipedia, the roots of brown knapweed exude an herbicide to inhibit competition by a wide range of other plant species.  Consequently, when  knapweed replaces native grasses, soil erosion and surface runoff increase. 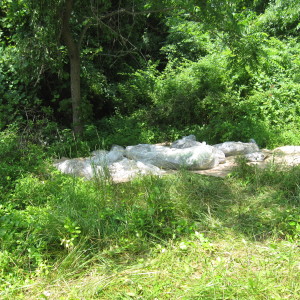 Because we needed a hidden yet convenient spot to solarize the clear bags of knapweed, we attempted to smother out the stiltgrass and cook the knapweed by laying the bags over the patch of grass.

June 26, 2015:  We uprooted this multiflora rose shrub growing into the trail, plus five additional shrubs to the right of the photo.

Judy Lom and I cut the canes above the ground high enough for the weed wrench to grab. Then we sawed a circle in the ground around the stub to sever the lateral roots. The large weed wrench uprooted the plant, and we pulled the remaining laterals.

Once all the shrubs, poison ivy and English ivy were gone I sowed the open ground with Indian grass seed. This area receives plenty of morning sunlight for growing native grass.

June 27, 2015: Barbara Wildfeir worked on the multiflora rose, Oriental bittersweet, porcelain berry and maple trees east  of the trail and north of the upland fence, opening up this impassible area.

Still need to remove English ivy from along the ground before sowing seed. Looking good.